Psicothema was founded in Asturias (northern Spain) in 1989, and is published jointly by the Psychology Faculty of the University of Oviedo and the Psychological Association of the Principality of Asturias (Colegio Oficial de Psicólogos del Principado de Asturias).
We currently publish four issues per year, which accounts for some 100 articles annually. We admit work from both the basic and applied research fields, and from all areas of Psychology, all manuscripts being anonymously reviewed prior to publication. 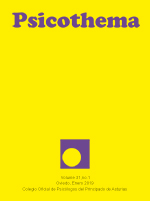 Scale of the University of Oviedo for faculty evaluation. The development and use of a scale to evaluate faculty at the University of Oviedo is presented. The scale consist of 15 Likert items; ratings are provided on a five point scale. The scale was used recently (1990) by 14.600 college students who answered a total of 65.106 protocols in order to evaluate 1.174 faculty. Results show that the scale has adequate metric properties, with a high reliability ( a = 0.9616; O = 0.9639) and factorial validity. Overall, the results also show the faculty are performing well, and those faculty and/or department in need of specific help can be identified.

This article analyzes a type of Problem Solving Behavior in which (a) the responses were chained by direct contingencies, (b) a new response was included (one of the behavior chained was, then, new), and (c) all individual responses were maintained under the same motivational condition as that which controlled in the problem solving test. The first experiment systematically replicated Epstein's 1985 study by separately training a pigeon to push a box towards a green spot, after non-directional pushing, to climb and stand on the box, and to peck a facsimile of a banana in the bird's reach. Differences with regard to Epstein's study were: no extinction of flying or jumping with the banana out of the bird's reach, using a naive pigeon. In the test (with the banana out of reach and the box on the opposite side of the chamber) the pigeon stretched repeatedly towards the banana, pushed towards it, stopped under it, climbed, and pecked it several times.

Experiment 2 evaluated how the different responses contributed to problem solving. A test was conducted after the training of each behavior. Four pigeons participated; two of the four pigeons were trained to push a box towards a target and two were trained to push the box away from a target in and attempt to isolate the stimuli controlling directional pushing in the test. In each test, only responses acquired previously, either directly or by generalization, appeared during each test. Pigeons trained to push towards or away from the spot, pushed, respectively, towards or away from the banana in the test, except for one pigeon which never pushed in any direction. No flying or jumping appeared. The test conducted after all the responses had been trained (Final Test) showed sequences with all the possible responses, but the order in which they appeared formed unsuccessful or "almost" successful chains ("almost" because the pigeon stood on the box with its back to the banana, but pecking did not occur: the banana was not in the bird's visual field). Some factors likely to explain these results are discussed as a function of: (a) the comparative rates of reinforcement among the possible responses in the test, which probably accounts for the order of the chained responses (and hence, of the successful or unsuccessful chains), (b) the schedule of reinforcement for each behavior, which probably gave rise to successful connected chains (one response quickly followed by another) or successful but disconnected chains (unnecessary repetitions of the responses constituting the solution to the problem). Along with evidence from other studies these results led to a consideration of different types of successful problem solving.

An attempt to reconceptualize placebo phenomenon. Placebo isn't only a glucose pill, and a glucose pill is not always a placebo. The concept of placebo in Psychology comes from Medicine and Pharmacology, and its theoretical conception, as well its application has been biased by its origins. We believe that placebo is not an unitary concept: Placebo can have different meanings, depending on the scientific discipline in which it is used. We defend the existence of placebo in Psychology, Medicine, and other sciences, but we consider that, what traditionally has been conceived as placebo in psychotherapy rests on unknowledge. We attempt to re-conceptualize this phenomenon in the setting of scientific theories.

Eye position and the activity of 10 identified abducens motoneurons have been recorded during spontaneous eye movements in the alert cat. Total of 27 parameters were defined from recordings of eye position and velocity, from abducens motoneuron firing rate, and from a proposed double exponential model fitting motoneuron behavior during eye saccades. The principal component analysis was applied to these variables. Results suggest an independent coding of saccade duration and amplitude as well as confirm the validity of a double exponential as a description of motoneuron activity during the burst.

Interference in dual tasks and extreme motivación. While the general analysis shows linear independency between extreme motivational factors (extreme self-valuation and extreme work-valuation) and interference in dual tasks, monotonous and long duration, the zonal analysis (six grupos) in a factorial design 6 x 4 x 5 (extreme self-valuation x difficulty x practice) shows significant non-linear relation between these extreme motivational factors and interferente. The differences are focused in four working sessions. The fifth experimental session of consolidation-continuance executed fifteen days ordered according to the parameters of task and time of realization. This would suggest that Pelechano's parametric option offers a serious alternative to the study of attentional processes.

Observation of preverbal intentional communication: A coding system based on natural category. Research in preverbal communication is mainly based upon observation. A critical review of literature shows, however, limitations in the observational systems used until now. In this paper, we describe a new instrument for the observation of communicative behavior. It was created in the context of a study on the emergence of the intention to communicate and its relation to other aspects of development. Starting from the concept of "intentional act of communication", which is considered to be a natural category with fuzzy boundaries, four category systems are developed. These are integrated into a single coding system, which allows to observe the frequency and functions of intentional acts of communication, as well as the particular behaviors involved and their space-time and social features. This system was applied in a longitudinal study of communicative development. Results revealed the relevance of the defined dimensions and categories, and the reliability of the data gathered through the use of the instrument.

Psychosocial factors and symptoms of depression: Self-monitoring. Two studies are reported, both of them concerned with the relationship between self-monitoring (SM) and depression. In the first, 124 adolescents and 156 undergraduates completed the Snyder SelfMonitoring Scale and the Beck Depression Inventory (BDI). Three months later, undergraduates completed the BDI again. An ANOVA with sex, age and SM total index (high, middle, low) indicated that the main effect and the interaction effects of SM were not statistically significant However, regression analyses with the factors of SM found by Avia, Carrillo y Rojo (1987) showed that the factor named social leading-activity was related to depression and the factor named "performance to bear upon people " (F2) was a vulnerability factor. In the second study, 79 undergraduates completed the SM Scale and the BDI, and three months later, the Life Events Survey and the BDI. Correlational and regression analyses indicated that F2 was related to depression and the factor named "congruence principles-behavior" increased the depressogenic impact of stress. Results are discussed in terms of SM multidimensionality and also depression research.

Mountain sickiness. Causes and mechanisms of mountain sickness are complex and have not been clearly determinated. Up to date the clearest way to prevent it is by acclimatization, although

acetazolamide has also resulted to be efficient in some individuals. However acetazolamide is not always recommended and acclimatization is not always possible, existing also a great variability to the responses to both solutions. Little attention, in the rewieved literature, has been paid to psychological aspects of mountain sickness, although it seems to exist indications that some psycological variables may modulate their effects. It may possible that anxiety caused by some negative cognitive interpretation of the effects and consequences of mountain sickness could generate stress and this could cause mountain sickness.

The purpose of the present experiment is to obtain information about the codes that underlie mental representations. More precisely it tries to corrobarate that the verification times of the truth or falseness of written sentences are shortened by their image values. We also want to verify if other kinds of varaibles, such as the conceptual relationships, biological versus non-biological content, and generality level, are also implicated. The semantic-conceptual relationships were categorized as classificatory, perceptual, and functional. Twenty two adult subjects participated in the experiment. The sentences were visually presented by means of a series of slides -292- whose content came from a previpus experiment. An LA-63013 chronoscope was used to measure the reaction times. The results showed that the sentences in which a classificatory relationship - "is a"- was implicated took less times to be verifies than the perceptual ones and these less than the functional ones (Student's't' was used). On the other hand, the Sperman correlations used to verify if reaction times were correlated with image values were not significant, except in the higt image value group -9 sentences only-. Finally, the reaction times for biological content sentences were shortes than for non-biological, and for basic-level sentences shortes than for superordinate (variance analysis). The interaction between category type and generality level was not significant.

Measuring fuzziness: Cross Modality Matching. When subjects estimate physical intensities by indirect methods, as in cross modality matching, their responses show an imprecise perception of the physical world. Fuzzy set theory san represent this type of uncertainty. Starting with the definition of a fuzzy set given by Zadeh (1965) our goal in chic work is to obtain a characteristic or membership function from cross modality matching data. A similar procedure has been used in Garriga (1989a) for magnitude estimation data. As in this case the modelization san be used to study between and within subjects responses and also to compare different psychophysical methods. Starting with auditory stimuli, observers represent physical magnitudes using line length estimation. These magnitudes are fitted to the model.

A structural equation model for panel designs. In the fields of social psychology and sociology of attitudes, the data obtained from longitudinal panel designs have been analyzed mainly by structural equation systems of each model: a) using first level latent variable models, in which several latent variables represent the content of each variable observed at different times, while other latent variables represent each wave of measurement (Jagodzinsky, Kühnel & Schmidt, 1987, 1988, 1990); b) other models analyze the same designs by means of 'true scores' of observed variables (Saris & Van den Putte, 1988).

Relation between metric multidimensional scaling and principal component analysis. The fundamental relations between metric multidimensional scaling (MDS-M) and principal component analysis (PCA) are explained. Both models are described in terms of type of data matrix analyzed, fundamental assumptions made, computational procedures, solutions and results. It is emphasized that the principal component analysis (ACP) is considered a R-technique, operating on covariance matrices, whereas the metric multidimensional scaling (MDSM) is a Q-technique which deal on matrices consisting of association taken to be a fundamental identity between the two models is shown to be merely the employment of the same theorems to arrive the solution.

Application of MDS for the analysis of differential semantic. We present here an application of non-metric multidimensional scaling (MM) for the analysis of semantic differential proposed by Osgood as a measure of meaning. MDS is presented as an alternative to configurational representation and analysis of principal co-ordinates (PCA). In the three cases very similar solutions were obtained. However, MDS has the advantage over PCA that it doesn' t require a positive semi-definite matriz. Threrefore, it is a more appropiate method for the characteristics of semantic differential.

IN SEARCH OF HUMAN NATURE. THE DECLINE AND REVIVAL OF DARWINISM IN AMERICAN SOCIAL THOUGHT(1)